A little I learned from this Angel… 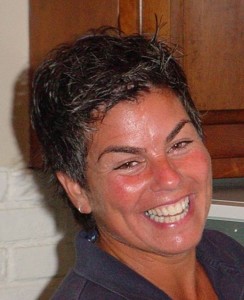 What can one say about someone who touched the lives of more than anyone can count, then passes from this earth far too soon?   I can start by saying that I knew this earthly angel well and spent over 15 years as her co-worker & friend – with her as a mentor to me about life.

I met Theresa in 1997 when she hired me on to be her right hand man at U.S. Blades & eventually the Inline Hockey Center at the Jewish Community Center.  From day one she made a profound impact on my life.   She taught me lessons in life that are too many to count.  But one she really hit home with was to “Listen to people; they love to have someone listen to them – take the time to listen”.   It took me many years to put this all into perspective and actually get it.  T however had it from day one when I met her.

She had that smile, that touch – that touch that I only once in my life had seen in another living, breathing human being.  (Gary Jones).   When she smiled she infected everyone with love, life & energy.   I can’t tell you how many times she took a child’s frown and turned it upside down.  I don’t think I have to tell you how much energy she had, as you could see it every day with T.  She’d work circles around Kelli, Vinny or I and at the end of the day still had enough energy to go play Ice Hockey, go out with friends, or doing something charitable for someone less privileged.

I was lucky enough to be with T for 6+ hours – 4 days a week, and learned to love her like a sister.  We’d disagree over this or that when it came to Roller Hockey policies and procedures.  She’d bend a little on her end to make it work and always, no matter what the outcome was at the end, would make me understand her side and she would listen to mine.   Many times we settled in the middle on things, but that was T – always giving even when the decisions were hard and the outcomes tough.

One of my favorite things was what T called “Hell Week” at the IHC.   (Kelli, Vinny & Ms. Pat – I am sure you know this well) It’s the week when we had rating sessions, made team rosters, and my job of scheduling 90+ teams for the season.  Each “Hell Week” we’d be working 60+ hours, and dealing with last minute registrations and through it all she’d smile and just work through it and not stress over it.  We’d be almost done, ready to post the rosters & schedule then head out the door for the night.  Just then the phone would ring and she’d talk to a parent like it was her best friend and say that of course we’d find a way to take  the late/last minute registration & little Johnny would get on a team.  She’d then take the time to re-do all the rosters, moving player X to team #1 and Y to team #3 – just to get Johnny in the league.  We’d get this done and be ready to post and wrap it all – and T would say “Hey you know who hasn’t registered? – Little Bobby”.  We’d start the process all over again.  About 7 or 8 players into this – T would say to me “Hey Stray, can you add another team?”  I’d be pulling my hair out about this time and having a cow over the hour(s) it would take me to re-do the schedules.  T on the other hand would smile, laugh and teach me patience I so needed – as about 10 minutes into re-doing the schedules she says “Hey, you know who hasn’t registered yet?  Little Katie” – and the process would repeat.   I miss those days spent with T and her love for life.

I watched her move a playoff game once to help out a youth team who was coming or going to a National Tournament.  The other coach had agreed to the switch and then after they lost, complained about the moving of the game.   T shut the door to the office in the IHC, slumped down behind the door and cried her eyes out.  Kelli and I consoled her and said she had crossed all the T’s and dotted all the I’s and the coach agreed to moving the game, but that hurt T more than any other issue I had ever witnessed.  She dried her eyes and moved forward from the bad experience and said even though she had to take the “Heat” she got from the coach, she did it for the kids and would do it again every time.  She was and always will be “For the Kids”.

Speaking of kids, let’s talk about the thousands of kids that she had an effect on.  I know from spending those years with her that thousands of kids all will take something from her in their life and use it.   Not just on the rink, but off.  Look at what she did for those kids in their daily lives – giving them confidence on the rink gave many of them courage and confidence off the rink.  Those children will grow up to be better people in life from the things that T passed on to them.  I watched little boys and girls grow up from 8-9 into 20 somethings today and they all say that T had a profound impact on their lives.

So now that our T has passed and we have lost an angel here on earth, let us know that our angel will always have an impact on our lives.  As sad as we are, let us not think of ourselves, but of the thousands of little lives she affected and brought joy to along her journey.

She was truly an angel here on earth, an angel we all benefited from knowing.